The History of the Osage

The Osage Tribe of Native Americans covered a wide range of territory in the American Midwest. Their hunting and warring expeditions spanned the entire Ozark Plateau region and included what would become the states of Kansas, Missouri, Oklahoma, and Arkansas. When the first Europeans began their exploration of the Missouri Ozarks, the Osage dominated this turf. A tribe of notable might and power, its warriors fought constant battles against other tribes on both sides of the Mississippi River. The Osage were considered one of the most warlike tribes in North America, and in the early 1800s it was said the tribe could raise an army of a thousand warriors for its attack or defense.

The Osage gave up their claims to much of the Ozark Plateau when they signed their first treaty with the federal government in November 1808. The treaty was reached at Fort Osage, on the Missouri River east of what is now Kansas City. The Osage relinquished all of their land in Missouri and northern Arkansas. The tribe gave up its claims to the land but continued to make hunting expeditions into their former territory. The treaty marked the beginning of the end of the Osage.

Osage warriors were legendary for their size, most being six feet or taller. George Catlin, a 19th-century painter, described the Osage as “the tallest race of men in North America, either red or white skins; there being few indeed of the men at their full growth, who are less than six feet in stature, and very many of them six and a half, and others seven feet.” They were athletic, agile, and strong. Osages of both sexes often bore body tattoos. Facial painting was used as signifiers of war, death, religion, or hunting. Warriors had a penchant for nakedness, and plucked out their eyebrows and shaved their heads, leaving only a scalp-lock of hair on top, ornamented with eagle feathers.

The famous American author Washington Irving offered the following description of the Osage warrior: “[The Osage are] stately fellows; stern and simple in garb and aspect. They wore no ornaments; their dress consisted merely of blankets, leathern leggings and moccasins. Their heads were bare; their hair was cropped close, except a bristling ridge on the top, like the crest of a helmet, with a long scalp-lock hanging behind. They had ﬁne Roman countenances, and broad, deep chests; and, as they generally wore their blankets wrapped round their loins, so as to leave the bust and arms bare, they looked like so many noble bronze ﬁgures. The Osages are the ﬁnest looking Indians I have ever seen in the West. They have not yielded sufﬁciently, as yet, to the inﬂuence of civilization to lay by their simple Indian garb, or to lose the habits of the hunter and the warrior; and their poverty prevents their indulging in much luxury of apparel.” 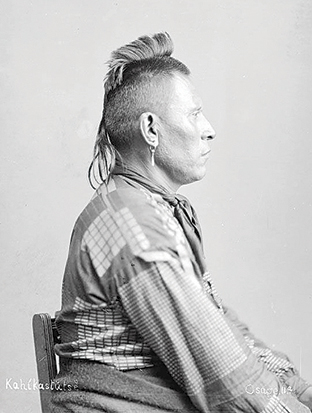