The Interstate that you see before you was the original Trail of the Osage. Today, we have designated it as Interstate 44. Previously, it was romanticized as Historic Highway 66 and before that, the Springfield Road, but clearly it has always been the Trail of the Osage. At the dawn of this nation’s expansion this trail carried furs and lead ore to St. Louis and brought back food, clothing, and supplies from St. Louis to the rural areas of Southwest Missouri. But this trail carried more than merchandise, it also carried ideas and innovation. It carried the ideas that would form a young, energetic, and growing republic of the early 1800’s. But, who were these trail blazers and what happened to them? Washington Irving stated that the Osage were, “the finest looking Indians I have ever seen in the West.” George Catlin described the Osage as, “the tallest race of men in North America either red or white skin, many of them six and a half, and others seven feet.” The missionary Isaac McRoy described the Osage as an, “uncommonly fierce, courageous, warlike nation.” The Osage, throughout history, were recognized for the fierce defense of their families, their land, and their freedom. Unfortunately for this commitment they paid the ultimate price, they lost everything they had dedicated in the land of their ancestors. They lost their home called Missouri.

Missouri Governor Clark said that the 1825 Treaty, which removed the Osage from Missouri, was the hardest treaty he had ever made and he feared he might be damned in the hereafter for his part in the agreement. The sculpture you see pictured before you is a tribute to the Osage Legacy. The sculpture will stand 35 feet tall, 20 feet wide, and 80 feet in length and will be located at the intersection of highway 19 and Interstate I-44 in Cuba Missouri. The sculpture will depict an Osage family moving westward on the Osage trail. The sculpture is designed to work with the contours of the site which will include working water features and native plant landscaping. Additionally, the walking trail will be lighted for evening viewing opportunities. The 35 foot height will allow interstate drivers to see the sculpture from the city limit boundaries, both east and west. This promises to be the largest sculpture ever dedicated, and erected, to the Osage Nation. It will be a visitor destination for all who desire to understand the Osage Legacy in Missouri. 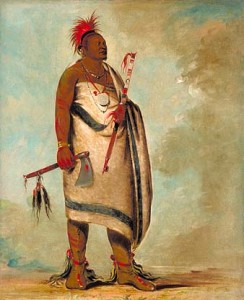 3 thoughts on “The Story”